This page has been visited ... times.

Today we are going to compare two ZigBee keys from the sonoff brand, the ZBDongle-P and the ZBDongle-E. The ZBDongle-P has a CC2652P processor, which has been tested for a long time and works on all home automation platforms. when the ZBDongle-E key has an EFR32MG21 processor, this one is much more recent but seems to be the future of Zigbee 3.0 key processors, given its recent introduction it will be necessary to be careful that it is well compatible with current home automation platforms. For example with the zigbee2mqtt service, this should be used with caution because it is still experimental, see the link in the table below. The main difference lies in the signal strength the ZBDongle-P has an initial signal of 5 dbm and can go up to 20 Dbm max, while the ZBDongle-E has a signal of around 20 decibels maximum. The second difference is in the dimensions the ZBDongle-P measures 66mm while the ZBDongle-E measures 11 mm less. Firmware updates work identically on both keys. 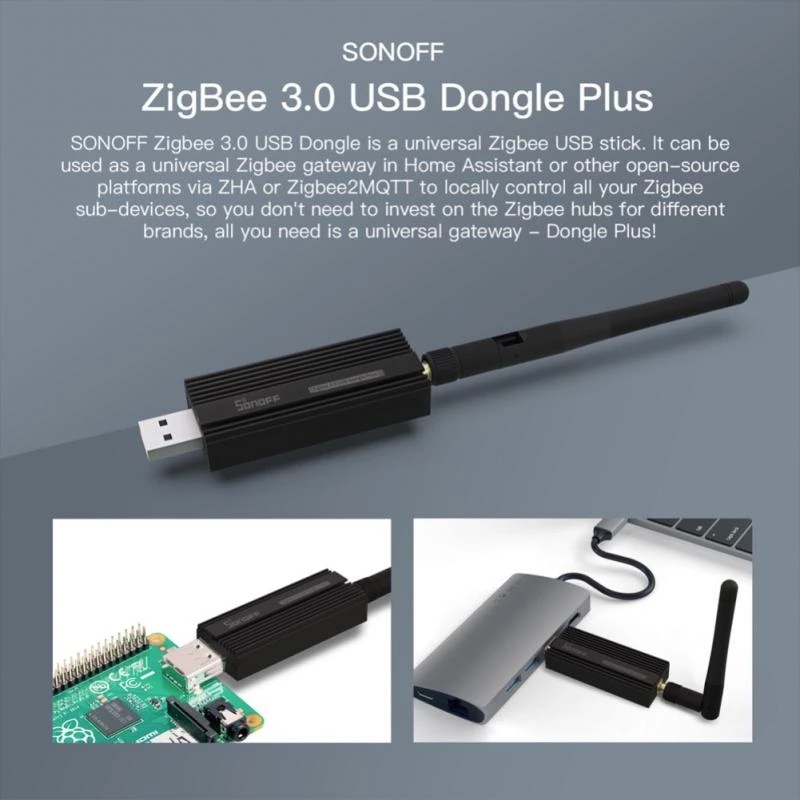 Buy Now out of Aliexpress

Sonoff dongle compatible zigbee2mqtt and homeassistant based on cc2652 chip

With sensitivity better than -104 dBm for 802.15.4 and long-range Bluetooth and output power up to +20 dBm, the EFR32MG21 provides a robust RF link to ensure reliable communications. EFR32MG21 uses Simplicity Studio 5 development tools, providing easy migration and rapid time to market with SDKs, SDKs, mobile apps and our patented network analyzer.

You can see in this video test, that the power and the quality of the link are much better with the new Zigbee dongles including the Soc EFR32MG21.

Note that Zigbee is not directly compatible with Matter. Instead, Matter uses a “Zigbee-like” radio standard called Thread, which adds IP addressing to the mesh. I’m pretty sure the cc2652 dongle can be configured as either a Zigbee coordinator or a thread edge router, depending on what firmware/software you install, but it can’t do both at the same time because the CC2652P and EFR32MG21 chips are not multi-threaded, so you’ll probably need two: one for your Zigbee devices and one for your Thread devices. However Silicon Labs released a new Soc EFR32MG24 this one is compatible Zigbee , Matter and Multithread, there are also novelties from Texas Instrument which released a chip CC2652P7 also compatible with Zigbee, Matter and Miltithread.

The USB Plus Zigbee 3.0 dongle comes pre-flashed with the coordinator firmware, but if you want to update, modify the router firmware and add to the dongle or generate the firmware that supports hardware flow control, please read the following document.

Flash firmware ZBDongle-P and E according to Sonoff

I chose this solution because it is not mandatory to open the dongle!

I wanted to write a tutorial but there is this simple tutorial on the Zigbee2mqtt site: zigbee2mqtt.io flash cc2652P with a terminal

Setting from 5 to 20db by default Below is a document written by Sonoff rather well done.

the ZBDongle-P equipped with the TI CC2652-P chip is up to date and works with all current software, however it seems to be falling into oblivion, just look at the number of products for sale on Aliexpress. there is only for the E version, indeed this one seems to be the new Zigbee standard indeed the processor is smaller and the performances are above at all levels, because of its youth it is still in the test phase but that seems to be coming to an end.

If you have a CC2652P chip, I don’t think you should hurry to change it to an EFR32MG21, especially if your mesh is solid. I think that manufacturers will soon release keys based on S-labs EFR32MG24 which is Multithread compatible, which simply means: Zigbee and Matter at the same time.

Founding member of the Haade site, a home automation enthusiast with all the tricks that go well.

During my years of experience in home automation I bought all kinds of connected switches, Xiaomi zigbee 1.0, Z-wave MCOhome switches overpriced and functional 2 years, Moes switches with button...

It is common in France to want to replace its classic switches with zigbee switches. In order to save the cost, it is not to be interested in big brands...

Zigbee 3.0 plug comparison, which one to choose ?

In a world where there is no shortage of smart plugs, I am going to compare 4 zigbee 3.0 compatible plugs from the brand Nous, Neo, Aqara and Lidl. Trying...